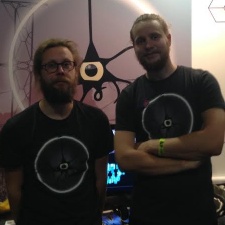 Today, we're speaking to Olli Raila from Team Ocmo, who submited Ocmo to The Very Big Indie Pitch at Pocket Gamer Connects Helsinki 2017 and walked away as Champion.

As PC/console gamers, we’ve always valued depth of gameplay, tough action challenges and longevity above all else.

Since we haven’t found a game on mobile that truly displays all these attributes, we decided to make one ourselves. We sought to create a Dark Souls-level challenge that fits the short gaming sessions typical for mobile play, striving for a gaming experience where there is always room to improve your skills.

Ocmo is a skill and physics-based ninja rope platformer where you swing with tentacles through the levels, using momentum to your advantage. You play as a monster that can run, jump and latch onto surfaces.

Our goal was to redesign hardcore platformers to suit touch screen controls. Ocmo is difficult but always fair. You can feel the hardcore mentality of Super Meat Boy as you die repeatedly, restart instantly and finally release tension by feasting on the sweet bunny at the end of each level.

There are 80 increasingly dangerous levels in the game, including secrets and boss fights.

The game mechanics have so much depth that you keep on finding new ways to use the movement system as you move through the game. Speedrunning the game has endless nuances and opportunities.

The mobile market is saturated with an insane amount of games making it difficult for anyone to get visibility. Free-to-play games push a lot of money in marketing which leads to higher costs for everyone.

It is very hard for a small premium indie games company to compete with that. Even after getting very positive reviews and winning various prizes our sales have correlated strongly with App Store featuring.

It was a really good experience. Getting such positive feedback always feels great. As a developer it would be nice to see all the other pitches too but I quess that would be difficult to organise.

The judges made some good remarks and pitching the game repeatedly gave a lot of confidence for future pitching.

The event was a good place to network with other game developers and gaining media coverage from steelmedia is of course very nice.

We hope that not too many players throw their iPads out of the window while trying to finish a level. It would be really nice to see a community of speedrunners form around Ocmo.

We have lots of projects that we would like to take further but in our current situation we try to focus on porting it on Steam.