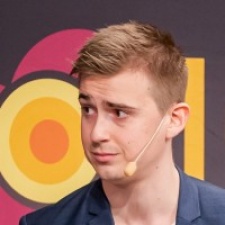 Today, we're speaking to Pontus Björkberg from Attractive Interactive, who submitted Paper Game to The Big Indie Pitch (Mobile Edition) at Pocket Gamer Connects Digital #1 and walked away as the champion of our first-ever digital pitch.

Pontus Björkberg: Attractive Interactive has been around for about two and a half years and we chose the name because it rhymed, and it's hilarious. We three founders all met at university where we studied game and software engineering and one day we decided to actually use what we've learned and try to make a game. And because we were all programmers, why not make a game where the players made both the art and the level design!

Co-founder and dreamer, programmer at heart. Inspired by challenges and possibilities, of which Paper Game has plenty.

Co-founder and CEO. Jack of all trades, doing everything from accounting to systems programming to investor relations. Longs to build a stable business that makes games that people love.

Co-founder and a happy programmer with 'cravings' for 'tasty' graphics! Driven by solving and improving complex programming problems and challenges.

Technical Artist. A silly moustache guy that sometimes is way too loud in the office. Working with front-end, making sure that anything from UI to gameplay feels tight and responsive! No game should be left out, feeling clunky and unresponsive!

Lead 2D Artist with a love of traditionally animated films and expansive RPG games. Solving your visual needs from world design to particle effects to animations all striving to create characters and worlds which players love just as much as I do.

Tell us about Paper Game that you pitched at the competition.

Paper Game can be described as a Mario Maker for the phone, that lets you draw your own levels on a sheet of paper and play them immediately by taking a picture. The entire game is built around turning your images into a foundation for a level, not only of drawings, but skylines, tree branches, or selfies all work. In the level editor you get to flex your design muscles by putting out traps, obstacles, and enemies to make your level awesome before you share it with the world, which is just a button press away.

What do you think are the most unique and interesting aspects of Paper Game that gamers may never have seen before?

It has to be our way of turning images into levels. It has never been so easy to start creating your own levels. You don't have to learn any tools to get started, you can take a photo of anything and seconds later start jumping around on it. This is a custom algorithm that we've been working on for three years in order to get it fast enough to run on even low-end devices, while still being powerful enough to perform well on a lot of different images.

What made you choose to focus on a game in which players have total control over the creativity?

It was the way people reacted to playing our prototype for the first time. To first show them that you can draw, and then see them start pushing the boundaries of what is possible and in the end leaving the paper all together! That's where we got our first genuine laughter, and it is the excitement that comes with that borderless creativity that we want to capture with Paper Game.

How did you come to choose the platforms that you would develop Paper Game for?

Because our game needs a camera to run, the decision to target mobile devices seemed pretty obvious. But we are also looking at expanding to more platforms once Android and iOS are up and running.

We've been doing this for three years now, and fulltime for almost half of that. Over time what 'survival' meant changed a lot. Before we found our publisher and it was only us three founders it was all about just finding the time and energy to develop the game, and the only consequence of not doing that would be that our game would never get finished.

But after we got a publisher and expanded the team, money became more synonymous with our survival. And with no game out yet to generate revenue, we've done a lot to find alternative sources of income. And in that sense it's really hard to survive as an indie developer, because it's way easier to make money doing something else. But we get to do what we love, every day. And this makes surviving a lot easier.

When I read a lot of these tips when I was starting out I found it hard to find tips I could actually follow. So I'll do my best to give advice that Pontus from three years ago would've loved to hear.

I've done this twice now, and coming into it the second time I remembered what the winner last time told me, 'You don't have a lot of time to speak, so just let your game speak for itself'. So I went in with no plans of showing them a pitch deck, I just showed them the basics of the game and let them ask the questions. This led to a relaxed atmosphere and great conversation, and a few minutes felt like plenty of time!

This win couldn't have come at a better time, we are about to release the game and we got some great upcoming features we can't wait to share with the world. We hope this will help us build our community and lead to a ton of interesting levels!

The possibilities with Paper Game are endless, and we aim for Paper Game to be played for a long time! And to keep it relevant we want to do what other games with a long shelf life do and empower the community. One of the features I’m most excited about is the fact that all obstacles and enemies in the game are powered by Lua scripts, which means it's possible for our players to create their own.

Modding is extremely popular, and Minecraft has 55 000 mods hosted on CurseForge alone. By opening up our game to modders, it makes it possible for a small studio like ours to even go past Super Mario Maker and their ~200 assets. We want to make Paper Game not only the easiest level designer to use but also the most powerful one, and we want to do that sharing everything with our community.