"Creating this sequel was almost a moral obligation..." 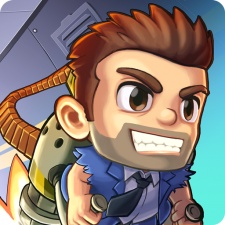 That leads us to our semi-regular Live and Kicking series, where this week we spoke to Halfbrick Studios product manager Jason Maundrell, ahead of Jetpack Joyride's 10th anniversary as well as what the long-anticipated sequel looks to have in-store.

PocketGamer.biz: With Jetpack Joyride on the cusp of turning 10-year olds, how do you reflect on its performance as a series – from launch to the title it is now?

Jason Maundrell: Jetpack Joyride has been a highly successful game for Halfbrick and continues to be a top-performing title even after 10 years on the market.

The team is currently made up of eight people.

Due to the pandemic, Halfbrick Studios had to change...

What steps have you taken to ensure that Jetpack Joyride maintains a sizeable and active player base all this time after its launch?

We want to make sure we continue to provide new and exciting content for our fans, so we’ve been expanding the Jetpack Universe with other studios such as; SNK Metal Slug, Sony Pictures Ghost Busters, Back to the Future, Star Trek, and more to come!

To what do you attribute Jetpack Joyride's consistently impressive grossing performance, and how do you sustain it?

We believe it's due to always having events and exciting new content for our fans to engage with.

Due to the pandemic, Halfbrick Studios had to change as we were no longer able to work in an office space. The studio has now gone full remotely, which has enabled us to employ the best people from around the world. The Jetpack team is now made up of people from all over, including Spain, Russia, Sweden and Australia.

What would you consider Jetpack Joyride's biggest achievement in the decade since launch?

A sequel to Jetpack Joyride is now in the works, what can you tell us about this?

Jetpack Joyride was - and it is today - a great success that has marked a whole generation of players. Since Barry grabbed the jetpack and started flying through the halls of Legitimate Research almost 10 years ago, we've always gotten the same question from fans: "When will the sequel come out?".

Let's just say that creating this sequel was almost a moral obligation to satisfy so many millions of players.

Let's just say that creating this sequel was almost a moral obligation to satisfy so many millions of players. But this sequel could not be just a remake of the original game. It needed a new twist to bring something new that players had not experienced before. When we started the brainstorming phase, everyone on the team agreed that it was necessary to integrate a new main game mechanic. And what characterises Barry beside his Jetpack? The answer was clear: Weapons!

Barry is familiar with handling weapons. We have seen him in Monster Dash and Age of Zombies using shotguns, machine guns and many more. So the premise was clear: Barry will fly with his jetpack and shoot with a variety of weapons.

What did you learn from the original that you are hoping to improve upon in the new game?

Players have been asking more and more about Barry and the Jetpack Joyride universe. So this sequel will also explore Barry's universe and delve into old and new characters. The narrative part will now be much more important. Barry will discover that Legitimate Research is just the beginning of it all and that there are more labs and villains for him to contend with.

The vehicles will now be much more impressive. Some of them will even make us leave the lab! The player will discover completely new vehicles and some of the most iconic of the first instalment will be rescued and modernised. We are confident that this new instalment will satisfy both old and new players.

When is Jetpack Joyride 2: Bullet Rush expected to launch? Will it launch globally and on what platforms?

Like the first game, Jetpack Joyride 2 will be released on both Android and iOS. Regarding the global release date: I'm afraid it's still too early to give you a concrete answer. I can tell you that the team is working very hard every day to bring the game that all fans want as soon as possible. But it would be great if it coincided with Jetpack Joyride's 10th anniversary, don't you think?

Do you think the sequel will arrive on other platforms, such as a Switch?

It’s always possible, we never restrict our games to platforms, but we will only release games on a platform that would make sense for our players.

Anything else you can tell us about future projects?

We currently have multiple teams working on new game ideas – however, they are too early to share, due to them potentially being cancelled. But in saying that, we are also looking at exploring an Age of Zombies sequel.

Jetpack Joyride 2: Bullet Rush is now in soft launch across various countries. Head on over to our soft launch list to find out more.

Crash Bandicoot: On the Run - 400% faster than other endless runners