The advantages of the new technology 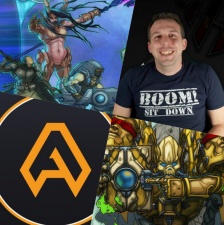 Getting ahead of a trend is something most companies aspire to on a regular basis.

Being part of new, emerging technology ahead of its inevitable break into the mainstream is always an exciting premise, but leading that conversation can be even better.

NFTs, or non-fungible tokens, have exploded over the past 12 months and all trends point to one trajectory: up.

While still emerging in many forms of media, the first NFT was actually minted in 2014 via Kevin McCoy's Quantum before going on to sell for $1.5 million at auction seven years later.

A big leap, but nothing in comparison to the record-breaking "Everydays: the first 5000 days," a digital piece of artwork by Mike Winkelmann (known as Beeple) that sold in February for an eye-watering $69.3 million, making it the most expensive NFT to date.

The market itself has skyrocketed.

The first quarter of 2021 brought about a $2 billion total value of NFT sales, an astronomical rise of 2,100 per cent from the previous three months.

Big names such as LeBron James, Justin Rolland of Rick and Morty fame, and Twitter CEO Jack Dorsey are all well embedded with the community. Heck, even Sega, Gameloft and Hasbro are getting in on the action now.

From all of this, though, gaming alone is setting itself up to be NFTs' biggest avenue.

Take Axie Infinity, the play-to-earn Pokémon-inspired game that has seen its daily active users spike by 233 per cent since June, now surpassing more than one million daily active players.

The first quarter of 2021 brought about a $2 billion total value of NFT sales.

It's a vastly growing community, one that could be compared to the early days of the battle royale and how PUBG helped introduce the genre to the world. However, it was Fortnite that took the battle royale to the next level.

So the question now is: What's going to be the Fortnite of NFTs and where will it come from?

"Mobile is not only the fastest-growing gaming platform but also the most globally diverse," he says.

"We see this vibrant mobile player base as the perfect fit for NFT games. NFT games provide a decentralized and dependable economy for games while putting power into players’ hands utilizing the play-to-earn model."

As part of this, AMG has partnered with game developer Skeleton Hand to provide consultation, influencer management, marketing, and community management services for its upcoming strategy collector game, Incarnate - set to launch in fall 2021.

"We’ve been developing Incarnate since 2014 when I had the idea for a board game that mixes a collectible card game (CCG) with Dungeons & Dragons, played on a battlefield that can be changed mid-battle," explains Skeleton Hand founder and CEO Hisham Saleh.

We see this vibrant mobile player base as the perfect fit for NFT games, which provide a decentralized and dependable economy while putting power into players’ hands.

"Since then, Incarnate has grown and evolved into the play-to-own hero collector it is today."

"For those of us heavily involved in the NFT gaming space, we see glimmers of what might come," Skeleton Hand game developer Bjørn Furuknap adds.

"We see that there are going to be revolutions in how people think not just about gaming but any form of digital and even physical entertainment," he says, speaking on the draw of NFT gaming and the impact the technology can have on the entertainment world.

Mobile has become increasingly more of a battleground for new concepts and experiments, such as free-to-play, battle passes, subscriptions, and the aforementioned battle royale.

It's no wonder why, with around 80 billion downloads taking place in 2020.

Why is mobile right for NFTs as well then? Well, as Saleh says, everyone has access to a phone…. yet there's more to it.

"There are some barriers to publishing on certain platforms, sure, but the key to breaking into emerging markets is making gaming worth people’s time.

"We’ve already seen NFT games help people literally pull themselves out of poverty during a global pandemic!" he says.

A big part of this is the new play-to-own model that is very much at the crux of Incarnate, with the idea being that everyone around the world can earn money while doing something that's fun.

Mobile looks to offer that flexibility to anyone's schedule, where other platforms cannot.

Next to this, the open player-based economy is designed to make the game more "fair and balanced."

While Furuknap admits the challenge of conveying this knowledge over to players at the beginning was a hurdle, the benefits of being able to use one NFT across a multitude of experiences is something unheard of in gaming until now.

Furuknap dives into this by outlining a racing game, where instead of paying $50 for a premium car in that one specific game and losing it forever once the game shuts down, the player can instead buy a Ferrari to take with them into the next big title, and so on.

From a developer's perspective, they would then look to sell different tracks for those cars to race on as opposed to different vehicles.

People often get swept away by the hype surrounding NFTs and forget that the game has to stand alone as an exceptional product.

"Grand Theft Auto-style game developers can sell their games for full price but allow players to import NFT cars from a racing game that players own, greatly increasing the value of both the NFTs and the GTA game," Furuknap adds.

Being very much embedded within the world of mobile games, AMG was immediately intrigued by the opportunity and exciting premise NFTs could have on the platform.

That said, for Evans and fellow co-founder Lance Frisbee (better known as Powerbang), the quality of the game remained a priority.

"Our number one rule when getting involved in a project is that the game has to be good," Evans says.

"People often get swept away by the hype surrounding NFTs and forget that the game has to stand alone as an exceptional product."

HellHades (aka Simon Lockerby), who introduced the pair to one another, adds: "Incarnate has a fantastic blend of strategy and style. People will be blown away by the opportunity to play and earn cash through NFTs in Incarnate!"

This has been the goal of developer Skeleton Hand from day one, to create a solid game that also taps into this new technology.

Now that any doubt has faded that NFTs are just a fad or temporary gimmick, there's a lot of speculation on where the industry is headed next. For Furuknap, NFTs offer more than traditional gaming and are the beginning of something big.

"When the internet started growing in the 90s, very few people saw the rise of Facebook or Twitch or how completely dependent society became on the confusing and scary technology we know today," he says, noting how none of his clients ever thought domain names or email would catch on.

Furuknap continues: "As a game designer and developer, I love storytelling and the creation of universes. I want players to fully immerse themselves in the characters, the lore, and the feeling that I try to convey.

"With NFT gaming, that feeling isn’t just isolated to one game title or even one game series anymore, it can span into other areas."

Being at the forefront can make a difference in leading the conversation. AMG looks set to be a big part of this movement with the launch of Incarnate not only set to challenge the competition but set to challenge the mainstream in how a game can be much more - exactly how Fornite did.

"AMG has been amazing at connecting us at every level and working behind the scenes to help get us into a position where we can put Incarnate in front of the players and content creators who will really appreciate what we’re doing and want to get involved early," says Saleh."

"Without these relationships with HellHades and AMG, there is frankly no way we would be where we are today!"

Incarnate is set to launch in fall 2021 with details regarding its first NFT drop coming soon. Find out more here.