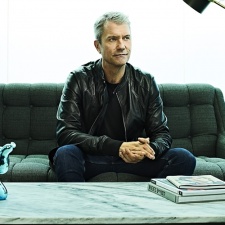 At this week's fourth annual Pocket Gamer Mobile Games Awards - supported by Game Insight - we had the honour to once again add to the ranks of our Mobile Legend. This rarefied award recognises an individual who has consistently gone above and beyond to achieve personal career success whilst making an outstanding contribution to the wider industry.

Over the past three years, we’ve celebrated the likes of King’s games guru turned XR pioneer Tommy Palm, Zynga’s human dynamo Bernard Kim, and of course, the entrepreneurial titan Kristian Segerstrale. This year, we chose to present the award to an individual who has made waves across numerous industries and was a mastermind behind one of the original social media networks, MySpace. That individual is Chris DeWolfe.

This is Chris's Space

Take yourself back to the early 2000s, Nokia brick in hand as the high tech tranquillity of broadband access began to replace the screeches and squawks of dial-up.

During the rise of the internet, our recipient helped establish one of the most popular social media platforms in existence, with MySpace reaching just over 115 million unique users (at the time even larger than fellow social media behemoth Facebook). After its sale to News Corp in 2005, MySpace became the most visited website in the world and one of the most lucrative right up until DeWolfe's departure in 2009.

The mobile grass is even greener…

Stepping into pastures new, he subsequently moved on to the mobile games space. Inspired by a conversation with Softbank’s founder Masayoshi Son on a trip to Japan, DeWolfe founded Jam City in 2010, together with former colleagues from MySpace and 20th Century Fox’s Josh Yguado.

The company grew steadily through acquisition and launches, and has exploded into one of the leading lights in the industry over the last decade, with 825 staff and nine studios responsible for huge titles such as Harry Potter: Hogwarts Mystery, Cookie Jam, Panda Pop, Disney Emoji Blitz and Family Guy The Quest for Stuff, collectively achieving well over 1.3 billion downloads.

One in a billion!

Look to the current day and DeWolfe was named Time 100’s most influential people in the world and picked by the legendary Barbara Walters as one the 10 most fascinating people.

Yet it doesn’t stop there; in the last few months, he's been busy overseeing the next huge step as Jam City prepares to join the ranks of listed games companies and unicorns by merging with DPCM Capital and acquiring Ludia to deliver an enterprise worth well over $1.2 billion - before flotation.

Chris DeWolfe is a true force to be reckoned with in the digital world and we predict his contributions to mobile gaming will continue to cause ripples throughout the industry. We can’t wait to see what this legend does next…

You can see the full list of winners at this year's Pocket Gamer Mobile Games Awards on the official event website.