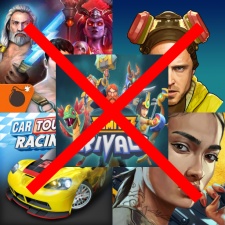 One of the things we're best known for at PocketGamer.biz is our Soft Launch list - a huge, though not exhaustive, list of the biggest games currently being tested in select mobile markets.

And while the vast majority of games we track do eventually see the light of day, there are also a not insignificant number that fall at this hurdle and never make it to the wider world.

There's any number of reasons why, such as the early data doesn't show much promise, the developer chooses to take their future in a different direction or the studio just shuts down entirely.

Didn't quite make it

The games themselves might even have been good, though we'll never know just how good they could have been. And some of them aren't quite dead yet and are instead waiting for the perfect time to make their appearance.

Whatever the reason, five games we tracked stood out for us this year as significant titles that were sorely missed in 2017 and we'd like to shed some light on them once again.

So, join us as we explore the games that sadly didn't make it out of soft launch this year and what exactly happened that led to their demise.