From mobile to cross-platform streaming, all kinds of games were welcome on the big stage 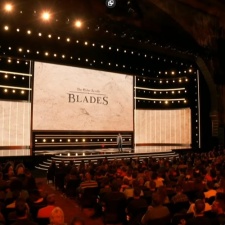 More than any other E3, this year’s show has given a platform for mobile that stands alongside the big triple-A console announcements.

Unlike in the past, there seemed to be a confidence about making mobile announcements from the big companies. Microsoft, Ubisoft, Square Enix and Bethesda all took the time to discuss their mobile plans.

Bethesda opened its E3 press conference with The Elder Scrolls: Blades - a title built for mobile. That was before footage of the aforementioned Fallout 76, Doom Eternal and Ghostwire: Tokyo.

Also interspersed within those announcements, not just with a forgettable nod or small trailer, was the reveal of the return of Commander Keen, also heading to smartphones.

Even Microsoft, which announced its future console plans under the codename Project Scarlett, had time to show off the latest on Gears Pop.

Then there was Project xCloud, Microsoft’s play to enable Xbox players to stream games on any device: including their smartphones. E3 attendees have had the chance for a hands-on this week, while the service will launch to the public on the Xbox preview programme in October.

It’s here where the lines begin to blur between platforms.

It’s indicative of the two big themes from this year’s E3: streaming and subscriptions. Microsoft has the Xbox Game Pass - and it’s acquiring a host of studios like Psychonauts 2 developer Double Fine to develop content for it. While Microsoft is a console and PC games company, it’s future is clearly cross-platform (as also shown by the recent reveal of Minecraft Earth).

Ahead of the show, Google revealed more details on its own games streaming service Stadia - which will be available across devices.

This year’s E3 marked the start of a future that’s mobile and cross-platform triple-A, where games of all kinds are welcome on the big stage.

For that, there will be a $9.99 Pro subscription service, through which players will receive regular content added to their games library - though exactly what titles are included remains to be seen. There will also be a store for players to buy games separately and stream them.

Joining Stadia is Ubisoft and Square Enix. The former is bringing its new uPlay+ PC subscription service to Stadia in 2020, while Square Enix revealed its own Stadia lineup that includes the latest Tomb Raider trilogy and Final Fantasy XV.

All of these games will be available across devices.

With publishers in the past seemingly afraid of revealing their mobile plans, perhaps afraid of backlashes like that seen with Diablo Immortal (which in part suffered from its own, unique timing problems), it was refreshing to see confidence in the platform by most companies involved with mobile games announced on their own terms - with the exception of Nintendo.

This year’s E3 marked the start of a future that’s mobile and cross-platform triple-A, where games of all kinds are welcome on the big stage.